No To Dog Meat

Every year millions of dogs and cats in Asia are brutally slaughtered for food and fur Our charity mission is to change that through campaigning,education and rescue. Your donation will help us achieve this.

The #NoToDogMeat campaign began on social media in April 2013 and held its first World Awareness day on May 18th in 36 cities. It soon became a UK registered charity and in 2014 the USA chapter was founded which is now a 501(c)3. The charity's mission is to promote humane behaviour to cats and dogs and to push for animal welfare laws to be implemented and respected throughout Asia. We strive above all to empower grassroots activists and rescuers knowing their actions will bring change.In 2015 we formed an alliance in China to build a rescue shelter. It is beyond belief in our new millenium that cats are plunged into boiling water in South Korea or skinned alive in China. Beliefs that the more the animal suffers the better the meat will taste needs to change. For Camille's sake economics can no longer override ethics. Our charity motto has always been #NoActionTooSmall. Why not join us?

Camille is a little Tibetan Spaniel with huge piercing brown eyes. He was obviously someone's pet for the first few years of his life. How in the scorching heat of August 2015 he came to be on a truck packed tightly in a cage with other stolen pets and strays on the Beijing Highway we will never know. What we do know is our CEO Julia de Cadenet was on hand with a team of Chinese Activists to save him and help provide the medical care so desperately needed to nurse the 140 dogs with him back to health.Julia, is a dual-qualified lawyer who first witnessed the horrific dog meat trade in 2009 and decided to do something about it. She now heads the UK registered charity 1154524 World Protection for Dogs and Cats in the Meat Trade, which is known by its volunteer team and supporters globally as NoToDogMeat with its distinctive logo that effectively conveys its message. 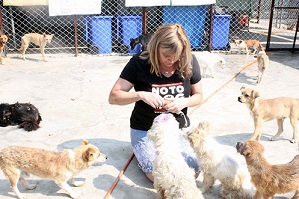 We support animal sanctuaries who rescue dogs and cats from the meat trade.

We believe every dog and cat deserves a second chance.

We lobby governments and ask for international welfare laws to be implemented.

We provide veterinary care for dogs and cats which have been rescued.

We are passionate annimal lovers striving to help activists in Asia bring change.