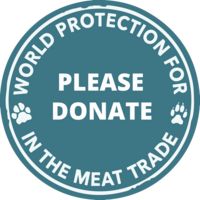 The Story of One Dog Rescued From The Meat Trade

Camille is an adorable Tibetan Spaniel with huge brown eyes.
Gentle and kind, he was obviously someone's pet for the first few years of his life.
Tibetan Spaniels are a firmly established part of Chinese heritage dating back to the time of the emperors - beloved companions of their masters and revered in the palaces.
How, in August 2015, he came to be in a cage on the back of a truck bound for slaughter, with over 300 other dogs big and small, we will never know. 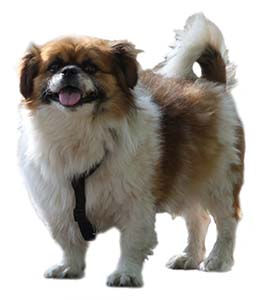 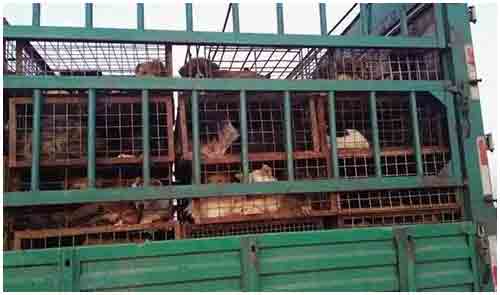 Was he stolen? Or was he sold into the dog meat trade - a cruel industry where over 10 million dogs and cats each year are brutally tortured for food and fur?

Our Charities Mission is to rescue as many dogs and cats as we can from this cruel trade,and above all to bring legislation to end it forever.
Every year we work on the front lines with local activists.

In China activists have been recording each rescue as a number derived from the date it occurs - for example #710 is 10th of July.
In 2015, rescues #809 and #816 happened days apart in the scorching summer heat of Beijing.
This meant volunteer resources and temporary holding yards for housing the rescued dogs were stretched to the limit.

These yards - which are rented on a short-term basis - have to be stocked with necessary medical supplies and partitioned with makeshift fencing to separate large from small dogs and males from females.
Volunteers sleep outside keeping watch over the severely dehydrated and often injured dogs by flashlight, to make sure they are not stolen by angry traders keen to recover their merchandise. 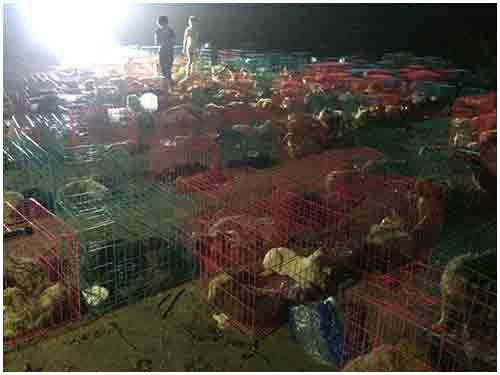 Despite the basic conditions and apparent chaos there is great camaraderie among these Chinese activists.
Many of them are students and young professionals wanting to make a difference.
This was the scene Robert and I encountered in the early hours of the morning as we arrived at the first base to help with the #816 survivors during our trip to China last year.

Our visit later that day to #809 yard near Daxing another hour away was particularly heartbreaking as it was feared distemper had broken out meaning the entire rescue could be in vain.
Knowing how hard the activists had worked to secure release of these poor souls -

packed tightly in cages on their way to slaughter - we needed to do more than just help out on the ground.
We needed to find a way to move at least some of the dogs to safety.

Activists appealed to all shelters and to us to help them divide up the hundreds of rescued dogs and we agreed to help fund the much needed vaccinations and immediate medical needs of over 140 of them.
These dogs were entrusted to Mr Zhao, a kind-hearted rescuer who has devoted his life to saving dogs and lives with his wife in two small rooms at his own yard north of Beijing.

At their new 'home' (for the time-being), the sickest of the dogs had been marked on the head in purple - signifying they had tested positive with distemper.
It was sad being with them in the yard, seeing their fur matted, mostly skin and bone, yet still so friendly and trusting.
Many of the dogs - especially the larger ones - could barely move as disease raged through them. As a small charity with only the beginnings of an international adoption process in place we knew we had neither the financial resources nor manpower to place them all at an animal hospital - where they would stand a real chance of survival - so we were faced with

We agreed with Mr Zhao that we would help fund a new quarantine facility and pay for as much general care as we could and, with heavy hearts, chose several small dogs to take with us to Beijing Hospital - and one of them was Camille.

Sure enough, Camille's blood work said the disease distemper had taken hold and for the next month we hoped and prayed for him to pull through as he fought for his life.
In the end our prayers were answered and he made it despite the odds, as did our other dogs -but still they all needed to be kept in isolation.
Our friends at TACN could not host them at their shelter but, instead, helped us find a wonderful small and inexpensive boarding kennel and we set the ball rolling on a process to bring Camille and his brothers back to Europe.

Unlike adoptions to America where, after just 10 days, a dog can often fly to his new home with only basic vaccinations, the process of bringing dogs into Europe can last over 3 months and involves multiple vaccinations and rigorous blood testing.
We were happy to be patient knowing our rescues would be well-fed and able to rest from the disease and trauma.

Only one dog can travel with one passenger at any given time and last week, as we were preparing our own trip to go back to China, we received wonderful news that at last a kind Chinese journalist had agreed to bring Camille to Paris! He arrived late on March 2nd greeted by our charity's mascot Samoyeds and, as you can see from the photos, has quickly settled in.

Camille still has a terrible skin condition for which he has started treatment - this was aggravated by the lack of quality food in China where there are no controls on animal food content.
We are confident he will make a full recovery and be part of our campaign team! He has such a gentle spirit and shows no sign of aggression.
If he is traumatised he hides it well - perhaps he knows his dark days are now behind him.